Natural Light Adventures 01: Timing is Everything.

Weather you're an advanced natural light shooter or beginner, timing is everything while shooting portraiture with only natural light.

As I briefly mentioned on the introduction already the basics are sunrise and sunset for best times in the day shooting outdoor portraits.

Sunrise and Sunset can give you both harsh shadows or soft, depending on angle you're shooting and how high the sun is in the sky. As well depending which direction your subject(s) are facing, away from the sun or toward the sun. 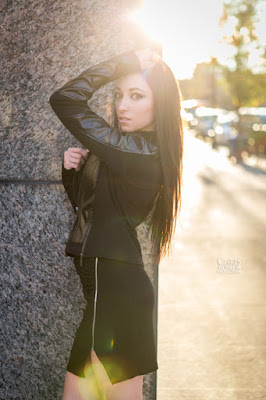 3 Important factors regarding clouds and the effects they can cause.

Aside from cloud coverage, timing can be tricky at times, but it can be pretty consistent when you're starting a new season like spring/summer (after day light savings for US), in the east coast (and in my area) it was best to start shooting at 6pm EST to little after 8pm EST max (with my camera/lens type), for more golden light and soft shadows type of light and opportunity to capture some golden flares for added element to the photos like these below. 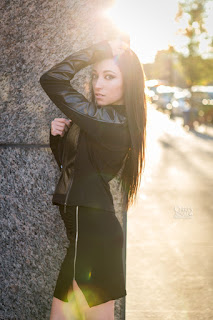 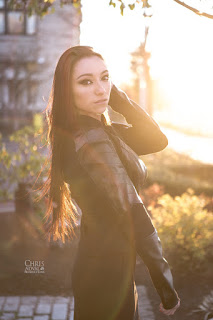 Exact timing should only be decided by your own sight (and gear), not mine. Many various reasons such as mountains, and height of the location you're at from sea level being the top two. So anywhere on the planet it vary times, you'd decide based on what is best for you.

I highly recommend only focusing on the beginner stages of shooting in natural light, which in my opinion is shooting on soft light opportunities, not harsh. For most occasions such as in portrait work and similar like modeling/fashion, etc. is best to start mastering soft light. Heading into harsh light types of light and making it look great is no easy task, especially without natural light modifiers (with assistants) like scrims, reflectors, etc. and cause for location scouting will be increased especially outside of urban areas without relying on buildings for shadow coverage. I'd go over in another post more thoroughly on types of light shooting in both harsh shadow and soft shadow conditions. Plus harsh shadow light in my opinion isn't most appealing to most of portrait work outside of fine art, and fashion, such as couples portraits I think should always be shot in soft light as the key light.

Another important tip to keep in mind is your gear. I'm no gear head, nor have much funding, nor I'd expect you as the reader to have that as well. So I'm writing to the people who are on a tight budget shooting natural light, so assuming you have entry level gear I'd mention a lot of advice about using entry level gear as well to mid level gear. I'll cover this more thoroughly in a gear talk post. But briefly gear has huge advantages and disadvantages.

What can gear cause as an advantage. If you have a camera that has high quality ISO at high ISO ranges that would widen your window of using natural soft light like for example. I had 2 full hours of great to decent lighting with my Canon 6D, shooting at ISO ranges from 800 to 6400 and once 8000. Now these numbers are only for a 6D, every camera is widely different in ISO's behavior.

Then you'd have to also think about lens selection too. By having lenses that can shoot Fast/Wide, aka low number in aperture like f/1.2 to f/2.8, will give you a ton ability in shooting in low light, but combining that with a camera body that has great ISO its a perfect combo, especially for natural light shooting.

So if you do not have lenses/cameras with great ISO or wide aperture then you're in a pickle. But not completely. I can help as much as I can but I highly recommend at the least purchasing a 50mm 1.8 lens as a learning lens, perfect for those on a budget for some cameras (at least for canon, new one costs a little over $100). So if you don't have a 50mm 1.8 lens ok, no problem, just keep this tip in mind with your kit lens (which should be a 16-55mm 3.5-5.6 lens generally, at least for DSLRs). When figuring out your timing as to your gear keep in mind your window of great opportunity will be much smaller than others.

Gear in general to anyone will control your length of window to shoot outdoors with natural light.

Like this post? Check the blog series index here!
Keep in mind the posts in the index are in order, so if you're jumping in reading the series at 3 or 5 you should really read from 1 to above to ensure you did not miss anything.
Posted by . at 9:58 AM